Many moons have risen and set since I last posted on this blog. Still  here I am again. 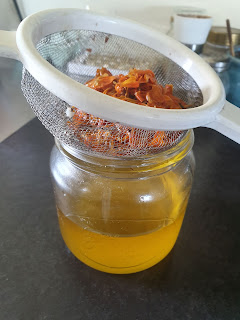 Check out how pretty this Calendula Oil is. The warm oil is draining on my bench ready to be made into hand cream at a later date.

First I picked my Calendula or Marigolds, I'm not very clear which I have or what the difference is. Just the petals go into the oil so I just pulled them off the plant. Then I put them into a glass jar and sat in a warm place for a week. I didnt think much of the oil so following Google's advice I gently warmed the oil and petals for 10 mins over a very low heat on the stove.

Finally it was ready. So lovely looking ...but it smells of nothing. I see now that when making handcream most people add orange essential oil. I think this is totally neccessary to improve the experience.


Posted by Anna Anderson at 9:39 AM No comments:

On Bees and Pony Poo

My blog has not been at the forefront of my life.  But life has been continuing onwards, with all the usual bumps in the road. 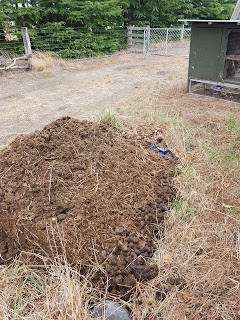 Recently an amazing local from the internet delivered a huge pile of shit (well, pony poo) for FREE.  In return I gave them tomatoes, capsicums and whatnot from the garden.

They said I can get a trailerload a week!  This will really help to improve the quality of our soil. Our land is on a river plain, and is full of stones which means it is very free draining, and when it is hot the stones heat up and everything dehydrates very quickly.

Poo will add texture and nutrients.  I just need to get it all spread out, which is quite a job with the wheelbarrow.

I started by shovelling it round all my fruit trees, in preparation for the wet we get in the winter. Water will soak the nutrients down, and hopefully not burn the roots.


Bees have arrived at Winderose House. Over the mid summer we caught 6 swarms. Three of them have survived and are thriving, much to my delight. My neighbour has empty hives and I have the will, so between us we have managed to get them up and going. It's been an exciting learning curve. I now have a bee suit. Cue the silly picture of me looking like an astronaut.


Posted by Anna Anderson at 1:03 PM No comments:

Lemons Galore, and the Water Rush

Here's a bucket of Lemons! gifted by my friend, Stacey.  She was trimming her tree, and this is only a small portion of what came off it. I won't even mention what she left on it, gazillions of lemons still. 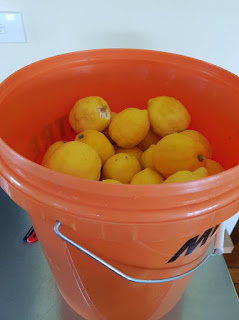 Apart from all the usual suspects, I am also going to try a few new things. I heard about peeling the skins and dehydrating them, then blitzing in the blender, to make lemon powder. I reckon that could be pretty good for popping into muffins, cupcakes and drinks.  Maybe even the odd salad dressing.

Some will be juiced and frozen into cubes.

Hopefully none will rot on the bench (generally happens when I run out of puff at the bottom of a glut).

We are having the best Spring we've ever had at our house.  No drought here.  It has rained every week, and we've had the odd major drenching. Combine that with many fine, warm days and you have the perfect recipe for a great garden.

The vege patch is going mad with asparagus and the raspberries are fruiting up nicely.

Water has always been a major headache at our place. If you've read my blog posts before you might know this. We run out. We save washing machine water, shower water, sink water and more. Some years we've only just made it through without everything dying. Well...big revelation! there was a blockage, probably a stone, in our intake pipe.  I won't bore you with how this happened, suffice to say, it's been like that since we built our house 6 years ago. DANG. Double DANG. Turns out there's also been a slow leak under our concrete (cue big hole now cut out), which has been a contributing factor.

Roll on better, watery years!
Posted by Anna Anderson at 3:42 PM No comments:

Stocking the Shelves with risotto

It is late Winter, and not a lot happening in the gardening but net mending, digging over and putting on compost.

So I have been stocking my shelves.

First I made French Soup and pressure canned it. 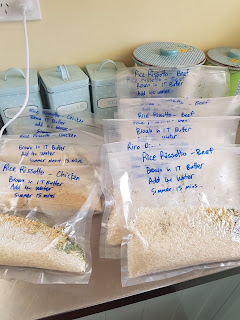 Then I made 11 packets of risotto.  The packet risotto is a family favourite for whipping up on lazy Saturday afternoons. Or as an easy side dish on nights when it's hard to russtle up something more exotic.

Here's how to make it.

If you had dried onion flakes or a packet of dried mixed vegetables these would go in well.

Mix the whole lot together and write instructions on the outside.  "Brown in 1T butter, add 4c water, simmer 15mins).

For my 11 finished packets I used 2 packets of Orzo pasta.

Orzo pasta 500g was $2.39 per packet.  I didnt have dried parsley or chives, but bought it. I now know to make some during the summer!  I bought WW garlic powder which was $2.00 and I used half of the jar.

Spring chores begin, spreading compost - this stuff is 2 years old. It was scrapings from where we feed our cattle and sheep consisting of silage, soil and cow poo all mixed together and left to rot. Isn't it beautiful! 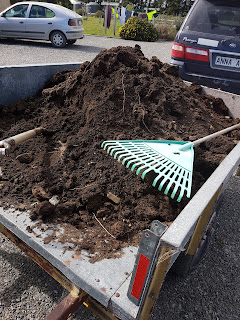 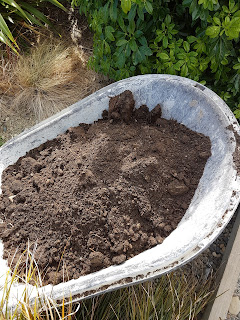 We've also had to do a little irrigation with the warming weather, but in consolation the beginings of vege growth begins, as usual, with the first spikes of asparagus showing! 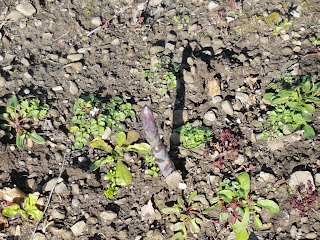 Posted by Anna Anderson at 7:31 PM No comments: 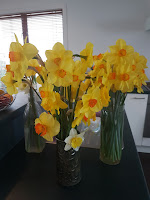 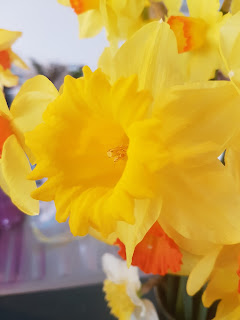 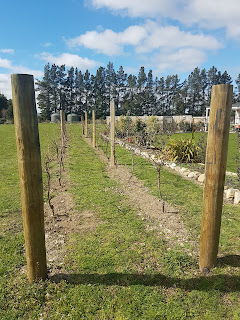 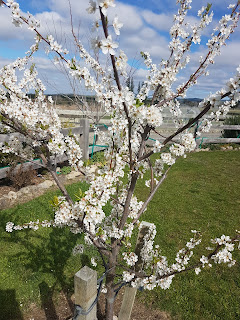 Posted by Anna Anderson at 3:16 PM No comments:

Teaching my son to cook - One Pan Fish

Hey Hamish, here's a dish that's easy for one person.  Made it myself last night. 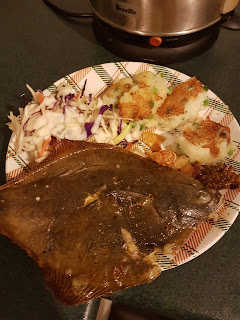 Fish and veges in one pan...

You need a frying pan only, but make sure its one with a metal handle not plastic, as you are going to put it under the grill.

One whole Flounder (I got one for $4.82 on special, usually about $6-7)
Left over mashed potatoes
Frozen Peas
Salad
Some butter

Heat the butter in the pan till frothy, add the fresh fish, eye side up (here's looking at you, kid!).  Mix a couple of handfuls of mashed spud with a handful of frozen peas. Form into 2 patties.  Put them in beside the fish. 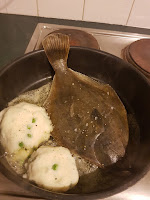 Cook the fish about 10 minutes, the flesh goes white when it's cooked. Put a knife in the thickest part of the fish and check for white flesh. Check for brownness underneath by lifting carefully and looking.  Do not turn over.

Heat the grill up.

Turn the patties once or twice as required.

When the fish is just about done, take out the patties and keep warm.  Put the frying pan under the grill. Grill about 5 mins till the fish is browned on top.

Slide the fish onto the serving plate,pour over the butter.  Add salt and pepper. Put the mashed spuds beside.  Arrange salad. Voila!

Posted by Anna Anderson at 7:27 AM No comments:

Hello, and thanks for visting my blog. Check out what I am growing and cooking from our garden in Amberley, New Zealand. Share the fun! our struggles with weather, wildlife, chooks and freak earthquakes.
If you have some great recipes you would like to see me try, or have some tips for growing and cooking from your own garden do send me an email grace.anderson@xtra.co.nz. I would love to hear from you.

Books I am currently reading